Initial hearings are possible next week in a Senate committee on a bipartisan pair of bills to enact four-year terms for county commissioners in Michigan.

Passage of these bills would end Michigan’s status as one of just five states with two-year terms on all commissioners. It’s time to end that dubious distinction and bring commissioner terms in alignment with the length of those for other county elected offices across our state.

The Senate bills are now before the Senate Committee on Local Government, chaired by Sen. Dale Zorn (R-Monroe).

“It’s important to make county voices numerous and loud as the Senate starts with these bills,” said MAC Governmental Affairs Director Deena Bosworth, “so we need members to help us now.”

Second, MAC asks county boards to approve a resolution in support of four-year terms. A template for this purpose can be on MAC’s website. MAC appreciates the early action of Genesee, Hillsdale and Marquette counties in adopting such resolutions. Once your county has approved the resolution, please send it to Hannah Sweeney at sweeney@micounties.org so that we can share with legislators.

For more information on this issue, contact Bosworth at bosworth@micounties.org.

The Podcast 83 team returns on Monday for another live session to report on activity in Lansing and Washington, D.C., that affects Michigan’s 83 county governments and the people they serve.

Click here to register for the live event, which will include a Q&A session on all of the hot legislative topics. The episode starts at 3 p.m. on Monday, April 12.

Members can view any previous episode of the podcast, sponsored by DTE Energy, on the podcast webpage. 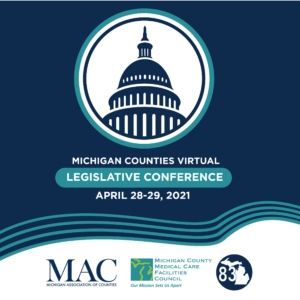 The top two leaders for the National Association of Counties (NACo) will provide a special briefing on the American Rescue Plan (ARP) and the $65.1 billion in direct aid to U.S. counties during an April 29 Plenary session of the 2021 Michigan Counties Legislative Conference.

NACo President Gary Moore of Boone County, Ky., and CEO/Executive Director Matt Chase will discuss the ARP and NACo’s targeted strategy for the implementation of this once-in-a-lifetime investment in county government.

This is just one of several plenary and workshop sessions that will provide practical information on issues of urgency to Michigan county leaders.

The conference is just three weeks away now. County officials are urged to register by April 14 to get the best rate for the two-day event. 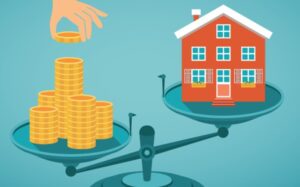 MAC recently joined a diverse group of entities to form the Housing Michigan Coalition. The coalition consists of community, business and government organizations that support increasing housing supply and affordability.

The coalition’s primary focus will be to advocate for legislation creating and expanding tools for local governments to support the development or rehabilitation of housing supply that is attainable to more of our citizens.

Legislation is being crafted to:

A full list of the drafted proposed legislation can be found here.

MAC expects bills to be introduced next week when the Legislature returns to Lansing. 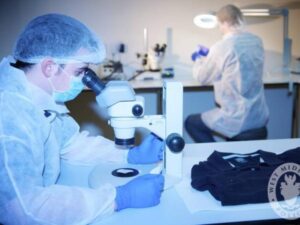 A new Executive Order from Gov. Gretchen Whitmer creates a Task Force on Forensic Science “to study issues related to forensic science and provide recommendations to strengthen the use of forensic science in Michigan’s criminal justice system.”

The task force’s mission is to review the state of forensic science in Michigan and deliver their completed findings and policy recommendations to the governor no later than Dec. 31, 2021. The findings will recommend, among other pieces, methodology improvements, processes to address misconduct and procedures to update stakeholders on developments in forensic science.

A list of current members can be found here. 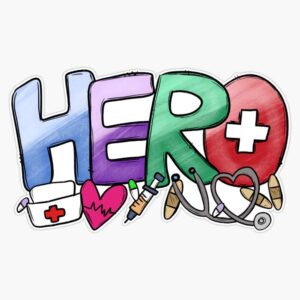 The Michigan Public Health Week Partnership is still seeking nominations of individuals and organizations that have made significant contributions to preserve and improve their community’s health for its annual Hometown Health Hero awards.

Deadline for nominations is April 26.

Nomination forms can be downloaded from www.michigan.gov/mphw. Completed nominations should be sent to Jim Koval via email at kovalj@michigan.gov or faxed to 517-335-8392.

Winners will be announced by the week of May 9, which will be Public Health in Michigan Week.

The Michigan Independent Citizens Redistricting Commission (MICRC) has set its first series of public hearings for its work to redraw political lines for the 2022 elections.

The public hearings will run from 5 p.m. to 9 p.m. and are currently set for virtual sessions, though that is subject to change as the pandemic health orders change. Locations and dates are:

Please note, the Independent Redistricting Commission will draw district lines for state legislative and federal congressional districts. The lines for county commissioner districts are handled by county Apportionment Boards. For details on the apportionment process, click here or attend a special workshop at the 2021 Michigan Counties Legislative Conference. 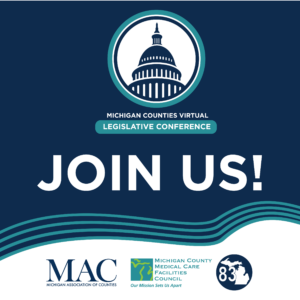 A Michigan Counties Legislative Conference always features in-depth briefings on what’s going on in Lansing – and this year’s virtual version is no different.

During a session to be taped in late April for broadcast on day 2 of the conference, Currie and the legislators will discuss COVID funding, the prospects for reform of local government finance, four-year terms for county commissioners and much more. (If you wish to propose a question for the panel, please send it to MAC’s Hannah Sweeney at sweeney@micounties.org by April 12.)

The conference is just four weeks away now. County officials are urged to register by April 14 to get the best rate for the two-day event.

Changes to how county and other public boards hold public meetings will result now that the Michigan Department of Health and Human Services has modified attendance restrictions in its COVID-19 health orders.

The revisions, made Wednesday afternoon and carrying immediate effect, would have the following effects on meetings governed by the state’s Open Meetings Act:

We are back at work this year, though, with new bipartisan bills — Senate Bill 242, by Sen. Ed McBroom (R-Dickinson), and SB 245, by Sen. Jeremy Moss (D-Oakland) — to bring four-year terms to Michigan, beginning with the 2024 presidential election cycle.

With legislators at home for their spring break, now is an excellent time for county leaders to pitch them on the value of extending commissioner terms.

For example, Passage of these bills would end Michigan’s status as one of just five states with two-year terms on all commissioners. It’s time to end that dubious distinction and bring commissioner terms in alignment with the length of those for other county elected offices across our state.

For additional talking points, view MAC’s resolution template for four-year terms legislation. (Also, if your county has not yet approved such a resolution, please do so and send a copy to Hannah Sweeney at sweeney@micounties.org as soon as possible.)

The Senate bills are now before the Senate Committee on Local Government, chaired by Sen. Dale Zorn (R-Monroe).  The committee is expected to start hearings on the legislation during the week of April 12. It’s important to get these bills moving early in the year, so please let your senator now your thinking on this issue.

“Counties Matter” is the theme of the 2021 National County Government Month (NCGM). Since 1991, the National Association of Counties (NACo) has encouraged counties to actively promote the services and programs they offer.  Counties can schedule activities any time during the month. NCGM is an excellent opportunity for your county to highlight effective county programs and raise public awareness and understanding about the various services provided to the community.

MAC is proud to partner with NACo and other county associations around the U.S. to honor public servants in county government and highlight the work they do to make our communities great places to live.

MAC has created a resources page for counties looking for ideas to promote their work. And we will be featuring #NCGM on our Twitter account and our Facebook page throughout April. 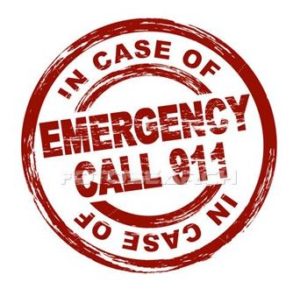 MAC joined with the Michigan Communication Directors Association (MCDA) this week on a letter to the state’s congressional delegation in opposition to a federal plan to alter the use of fees for 911 services.

In the letter, the two organizations warn members of Congress, “The (Federal Communications Commission’s) proposed rules could impinge upon Michigan’s ability to determine the definition of allowable costs for 911 fees. The federal proposal eliminates radio system equipment beyond the consoles in the 911 center, i.e., radio infrastructure, mobiles, portables, pagers, AVL (Automatic Vehicle Location) and MDCs (Mobile Data/In-Car Computer) would no longer be allowable costs.”

The letter asked for congressional help in dealing with the proposal to ensure Michigan’s 911 system isn’t harmed.

For more information on this issue, contact MAC’s Meghann Keit-Corrion at keit@micounties.org.

Keep eye out for survey of county officials by CLOSUP 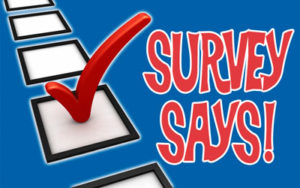 An invitation to participate in the Michigan Public Policy Survey (MPPS) program is coming soon to your mailbox.

The MPPS is a state-wide survey of local government officials conducted since 2009 by the University of Michigan in collaboration with MAC, the Michigan Townships Association and the Michigan Municipal League.

On Monday, April 5, you will receive an email link to the new MPPS questionnaire, which asks about your county’s fiscal health, as well as your insights about the local impact of the COVID-19 pandemic, your jurisdiction’s use of online technology and the functioning of democracy.

The MPPS studies don’t just end up on someone’s shelf — they are used by legislators, the media, the public and government officials to better understand what local leaders like you feel is really important, right now. Your participation is crucial to the success of the MPPS program.

Reports and data from previous MPPS surveys can be found on the MPPS website: http://mpps.umich.edu. 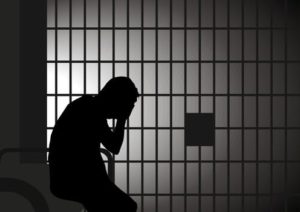 County officials are again invited to participate in additional webinar trainings on the nexus of mental health and public safety issues. The sessions, which are free thanks to the Michigan Department of Health and Human Services, run from 2 p.m. to 5 p.m. on the following dates:

This course is the equivalent of the 2-day classroom training. Participants must attend all four (4) sessions to receive a certificate. This course is approved by the Michigan Social Work Continuing Education Collaborative-Approval #111920-02. The Collaborative is the approving body for the Michigan Board of Social Work (12 CEs). Seats are limited to 47 participants.