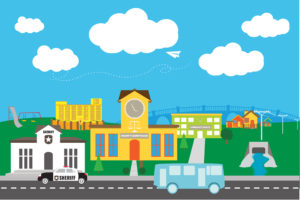 In 1796, the acting governor of the territory officially set the boundaries for Wayne County, which, at that time, included all of what later became the state of Michigan and parts of Ohio, Indiana, Illinois and Wisconsin. By 1830, Michigan had 12 organized counties. By 1852, most of the Lower Peninsula counties were established.

In 1891, the last of Michigan’s current 83 counties was organized.

County government exists to extend some powers of state government throughout the state. For example, the state requires county prosecutors to enforce the state criminal laws. Registers of deeds receive and maintain proper land records and other property-related documents. Clerks administer elections for the state and exercise other duties that are of particular interest to the state.

Counties also carry out programs that benefit primarily the local population. County parks and recreation programs, county water and sewer systems or community crisis centers are supported by counties because of want and need.

Although the counties act as “agents of the state,” they remain separate and with their own legal identity. They have the right to sue and be sued, enter into their own contracts, hold real and personal property, borrow money for legal purposes, perform acts necessary to safeguard county property and conduct county affairs.

Each county has a county board that serves as the legislative body. Each board has certain responsibilities as they relate to its budgets and ordinance-making powers. However, the board is responsible for setting policy (passing resolutions, its main device for stating its policies), as well as providing legislative oversight and constituent services.

The county board does not have police powers (health, safety and welfare) unless specifically stated in state statute.

Each county may have no fewer than five and no more than 21 board members. The apportionment commission, using limits determined by the population of a county, decides how many commissioners a county will have for the next 10-year period. Counties organized under a county charter are the only exceptions.

Meetings of the county board

Each board is expected to meet, at minimum, four times a year to ensure that it is concluding action on business of particular interest to the state by a given time of year.

Each county board meeting is to be conducted in public and must comply with the Open Meetings Act. The public is to be informed a minimum of 10 days prior to the meeting and must be able to offer testimony at the meetings.

Although county boards appropriate money for the budgets of lower-level courts and many judges have their offices and courtrooms in the county building, for the most part, the two entities operate separately.