Both the House and the Senate have passed the long awaited and finally negotiated supplemental bills that will restore more than $60 million in vetoed state funding for key county services.  The bill now await the Governor’s signature, which MAC is confident will happen before the end of the year.

$27.4 million in PILT (Payment in Lieu of Taxes) for local governments

$14.8 million in county jail reimbursements for the housing of state prisoners

$3.5 million in reimbursements for foster care services provided by counties

The vetoes and subsequent stalemate had forced counties to begin identifying service cutbacks and layoff targets to balance their fiscal 2020 budgets, as most counties start their budget years on Jan. 1, 2020.  As part of the final deal between the legislature and the Governor is a commitment to get the budgets done by July 1 each year and to also grant the legislature a chance to veto any administrative board transfers proposed by the Governor in future years.

For more information on MAC’s work on the state budget, contact Deena Bosworth at bosworth@micounties.org. 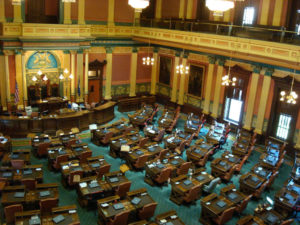 SB 322 and SB 323 sponsored by Sen. Victory (R-Ottawa) moved one step closer to enactment this week by passing the House in the late hours on Wednesday prior to the winter legislative break.  Since 2012, counties have had the option of absorbing their appointed road commissions, or in the cases of an elected road commission, a county could put the question up to the voters.  The law has had a sunset on this authority since its’ original enactment and is set to sunset again on January 1, 2020.

Rep. Wentworth (R-Clare) offered an amendment to require a vote of the people if a county would like to take an elected road commission and make them an appointed road commission.  This amendment was adopted in the House Ways and Means Committee before moving to the House floor.  Because this bill was amended, the Senate must concur in the changes before the bill is sent to the Governor for her signature.  Due to some timing issues, the Senate adjourned before the bills passed the House and therefore the amended bill will have to wait until the Senate’s return in early January before heading to the Governor.  For more information, please contact Deena Bosworth at bosworth@micounties.org.

“Managing Mental Health Crisis” is a series of one-day events designed to provide participants with a better understanding of mental illness as it relates to law enforcement.
“Managing a Mental Health Crisis (MMHC) is a culmination of knowledge and skills developed by law enforcement and mental health professionals with the intention of promoting effective and high-quality responses to mental health related incidents,” stated the Michigan Department of Health and Human Services, which is co-hosting the events with the Michigan Municipal Risk Management Authority (MMRMA) and The Cardinal Group.
The dates and locations are:
Each session runs from 8 a.m. to 4 p.m. and there is limited seating at each, so act quickly. To make your free registration, contact jericwaddell@thecardinalgroup2.com.