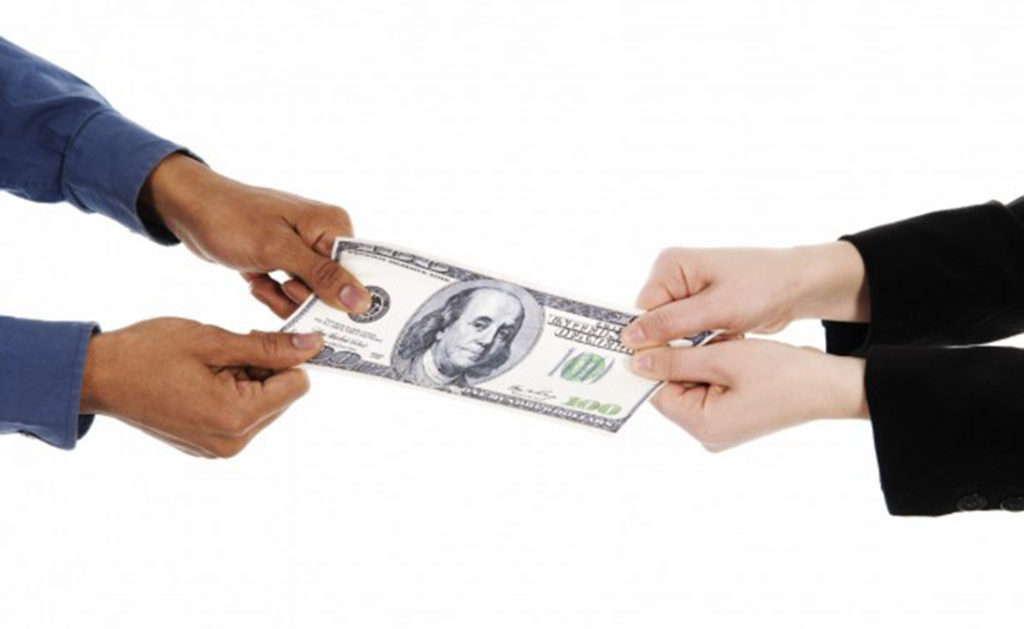 Actions by Senate appropriators this week would worsen the state’s disinvestment in county government and further stress the ability of counties to effectively serve Michigan residents, said the executive director of the Michigan Association of Counties.

Gov. Gretchen Whitmer’s budget has a 3 percent increase for county revenue sharing to just over $228 million, up from the $221.4 million for the current fiscal year. The governor’s budget recommendations were based on increase revenue for roads, but the Senate appropriators have chosen to not increase revenue along with the budget.

This would worsen a long-standing gap between funding for counties and for CVTs (cities, villages and townships) under Michigan’s two-pronged support for municipal government. Unlike the CVTs, counties do not receive constitutional revenue sharing. In fiscal 2019, CVTs received $859 million in constitutional aid and then another $255 million in statutory payments, for more than $1 billion. Counties received $221 million in statutory support only.

“We serve the same population as CVTs and have more mandated services,” said Currie. “And still they are getting a $33 million increase (in constitutional dollars).

“We are not suggesting that fewer dollars go to local governments,” Currie added, “but we do believe more should go to counties out of Michigan’s General Fund. If we can’t properly fund services during this long period of economic growth, when do state leaders think they can?”

Since 2004, the state has saved itself more than $2.4 billion by not making revenue sharing payments to counties that it should have. 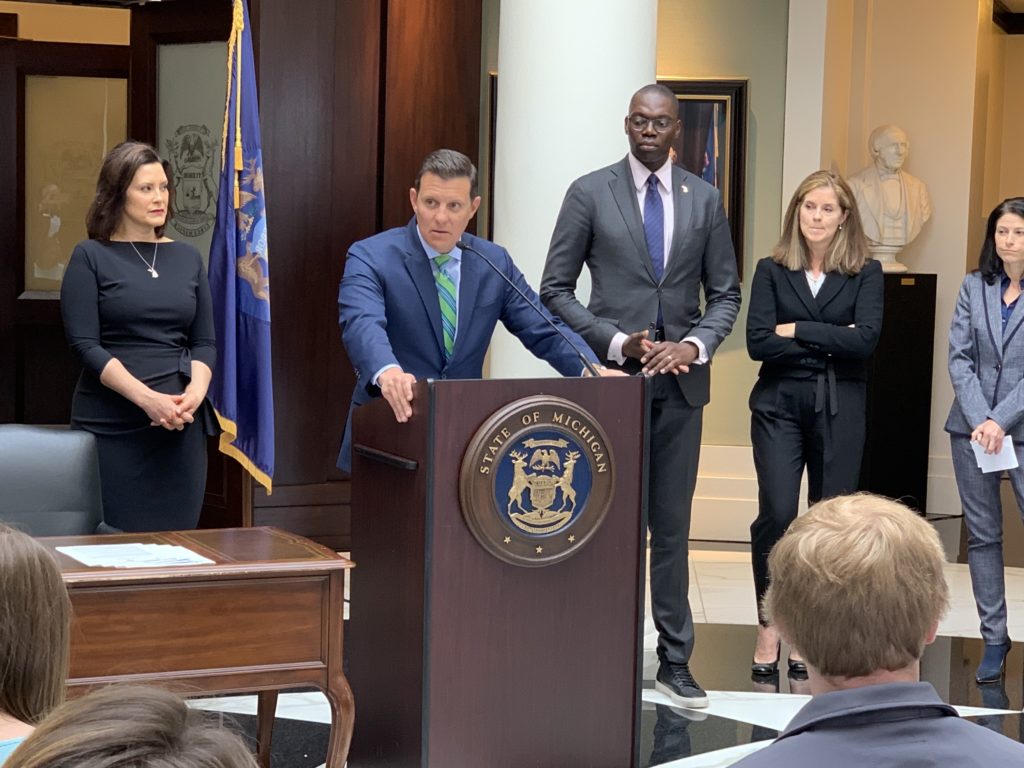 Michigan’s 83 counties helped announce an innovative partnership with the state of Michigan and a national nonpartisan research group today to use data to identify best practices for jails.

The Michigan Task Force on Jail and Pretrial Incarceration, (#MICJReform) an interbranch, bipartisan body will develop recommendations to expand alternatives to jail, safely reduce jail admissions and length of stay, support crime victims and better align practices with research and constitutional principles, Gov. Gretchen Whitmer announced today at a press conference at the Hall of Justice in Lansing.

Speaking at the same event, MAC Executive Director Stephan Currie said, “Our focus is specifically on county jails and easing the burden on county budgets. Although created by executive order, this task force puts counties squarely at the center, and we’re very happy to launch this partnership together. We’ll all benefit from studying our practices.”

Click here to watch a video of the event.

The task force will be supported by technical assistance staff from the Pew Charitable Trusts.

“The focus here will be on using data to drive solutions. Everyone is entering this effort with no preconceived notions and we are eager to partner with the state, Pew and others to make Michigan a leader in public safety,” Currie said. 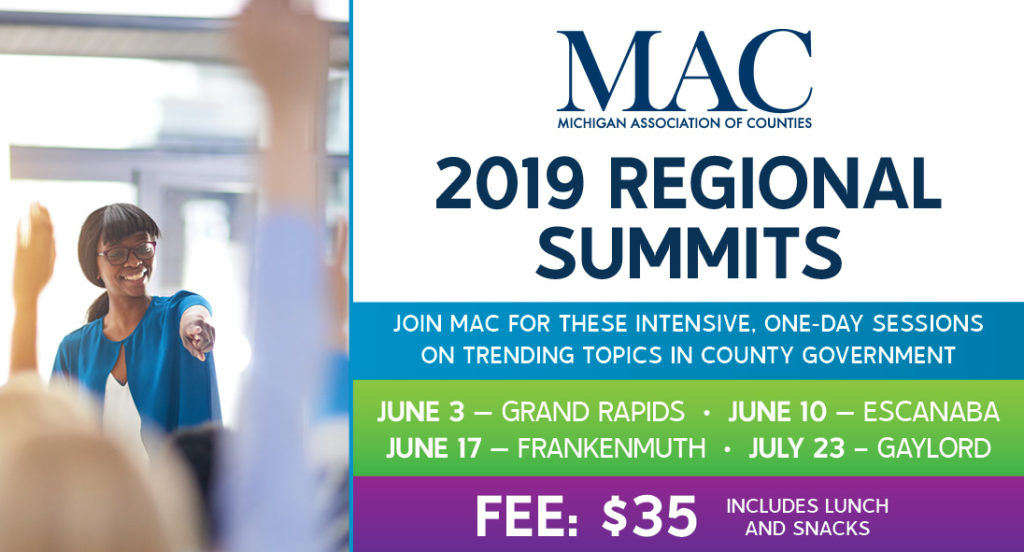 Commissioners and other county leaders can network with legislators, learn tips on drafting capital improvement plans and be briefed on cutting-edge economic development tactics at a MAC Regional Summit this summer.

As usual, MAC will offer the summits at four sites across Michigan: 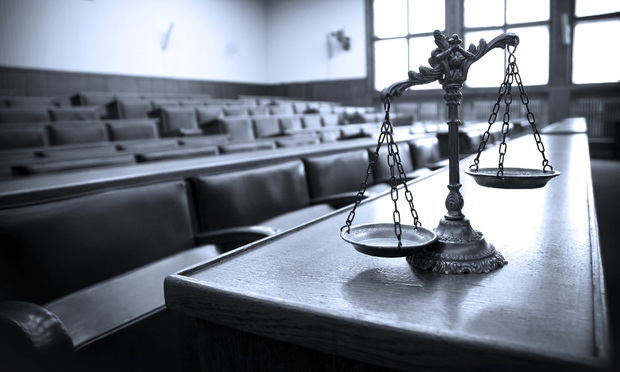 LANSING, MICH. – A state panel charged with recommending reforms to Michigan’s trial court system issued an interim report today with five proposals that offer promise for solutions to this longstanding challenge, but counties see much work remains in Lansing on this issue. The Trial Court Funding Commission released its work early due to pending litigation (People v. Cameron) at the Michigan Supreme Court that could affect the current funding streams for trial courts.

“These recommendations are a solid beginning on this vital issue. MAC is grateful for the work of Monroe County Administrator Michael Bosanac and his colleagues on the commission,” said Stephan Currie, executive director of the Michigan Association of Counties (MAC). “However, the central challenge remains – finding a stable, comprehensive funding system for our courts. With the potential effects of a Cameron decision looming, counties are eager to get to work with lawmakers on a permanent funding fix.” The commission’s interim report highlights five recommendations:

· Move toward a uniform employment system

Trial courts are the largest unfunded mandate on county governments in Michigan, with local funding accounting for nearly half the $1.14 billion to $1.44 billion in estimated costs. The commission was formed by the Legislature in response to People v. Cunningham, a Michigan Supreme Court decision that determined state law does not provide trial courts with independent authority to impose any court cost on a convicted defendant. The commission will continue to meet until its statutory expiration of Sept. 28, 2019. 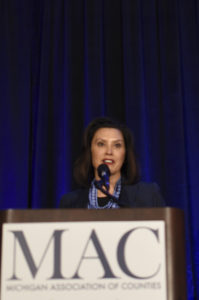 More than 300 county leaders from across Michigan heard Gov. Gretchen Whitmer make her case for increased infrastructure funding, arguing that Michigan must fund such work “at the pump.”

Whitmer made her comments during her keynote address to the conference on Tuesday, March 26 at the Lansing Center.

“On behalf of our members, I thank Gov. Whitmer for giving so generously of her time to talk to us this week about the challenges facing Michigan, particularly road funding,” said MAC Board President Ken Borton of Otsego County. “As front-line elected officials, county commissioners know all too well the frustrations of Michigan residents on infrastructure. We are eager to work with the governor and Legislature to find the necessary revenue and distribute it properly to get our roads back in proper shape.”

See her presentation in the 2019 Legislative Conference Presentations folder of the MAC archives.