For Otsego’s Johnson, it’s all about making a difference

By Will Hansen/Communications and Marketing Intern 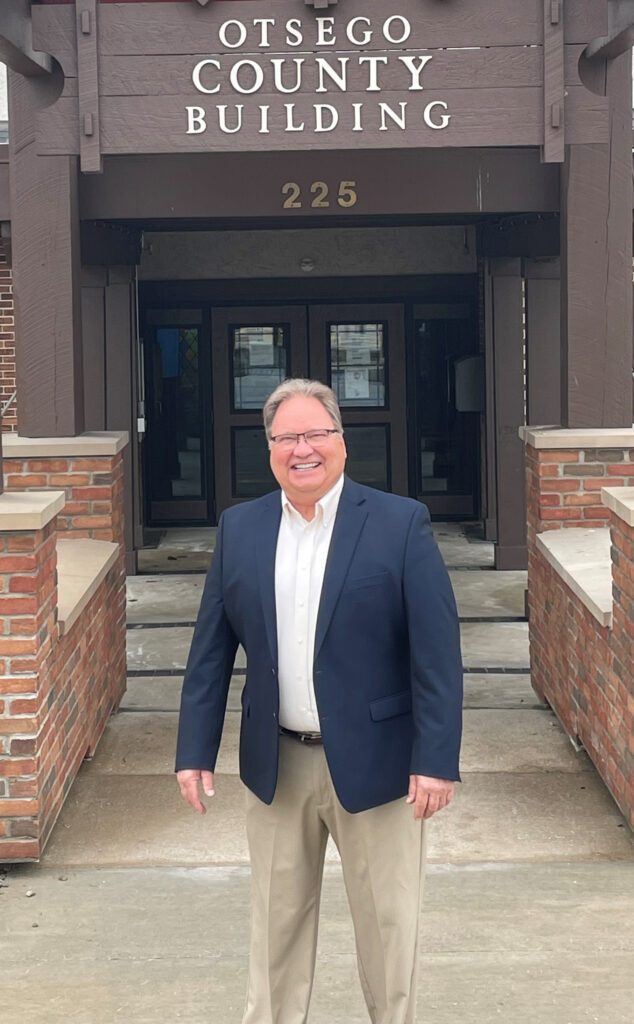 Doug Johnson of Otsego County is currently the longest-serving county commissioner in Michigan, having first taken office in 1981. (courtesy photo)

In 1980, Doug Johnson was four years into ownership of his father’s company, Mid-North Printing, in Gaylord. Living and working in a county seat of just 3,000, Johnson already knew several county commissioners and the importance of public service.

So, when a vacancy occurred on the Otsego County Board, Johnson said, “I thought, ‘It’s easy to sit on the sidelines and complain about something.’ (This is my) chance to get in there and make a difference.”

And that he has kept doing – through hundreds of board sessions, 40-odd county budgets, seven U.S. presidents, six Michigan governors and five Masters titles for Tiger Woods. In the process, Johnson has now become the dean of Michigan’s county commissioners.

In late 2021, MAC undertook a survey of continuous office tenure for all of Michigan’s county commissioners. Johnson, now in his 42nd year of service, topped the list.

The challenges of public life came early in Johnson’s tenure, he said, when Otsego was faced with what to do with a 600-acre piece of property that once housed a state hospital. “Since (purchasing the land from the state for $1), the county has been able to revitalize the acreage into a new high school, a community college and the Health Department, which haven’t cost taxpayers anything,” Johnson explained. “People didn’t agree with the move at the time, but since then it’s developed into quite a savings over the years, and I’m proud of that.”

Johnson, of course, has witnessed firsthand just how the responsibilities and routines of county government have changed between the 20th and 21st centuries. “It’s definitely gotten harder,” he said. “People are less patient and more frustrated.”

He’s also seen a change in how public servants are perceived and public life is conducted.

“It used to be you could respect one another and disagree and walk out of the meeting knowing that you disagreed on that, but leave it at the door,” he explained. “It’s just I sense a lot of frustration, which I can understand. But a lot of disrespect, if you will, and rudeness from the general public that I didn’t see 10 or 20 years ago.

“People’s attitudes change towards you once you get into office,” he added. “They are not always going to agree with you. And it’s always a challenge to help them understand why you do what you’re doing, and you’re doing what you think is right for the majority of the people that you serve. I’ve actually lost customers because of something that I took some action on, but I guess if that’s the type of people they are I don’t need them for customers.”

Through all these years, all those meetings, what keeps Johnson going?

Not content to contain his service to Otsego, Johnson leads the Board of Trustees for Michigan Counties Workers’ Compensation Fund and serves on the board of the Michigan Municipal Risk Management Authority.

Outside of public life, Johnson recently celebrated his 50th wedding anniversary with wife Sherry. They have three children and nine grandchildren. In what free time he has, Johnson loves to golf, fish and hunt – and for the past 13 years he’s been a member of a curling club.

Johnson named Ernie Harwell and Arnold Palmer as two inspirational figures in his life. “I met Ernie a couple of times,” he said. “I’ve had the opportunity to sit in meetings with him and have been able to have a conversation with him afterwards. He was inspiring, had great focus and knew how to treat people with respect.” Johnson also met the golfing great Palmer while at a tournament with his family: “We were invited to a dinner party after the tournament and my family was able to sit with him at his table.”

For those interested in starting a public career, Johnson advised, “Stay focused on the work and be true to yourself, your beliefs and your values.

“It is important to be honest and dependable and follow through on your promises; also, accept the fact that not everybody is going to agree with you and to not beat yourself up over it.”