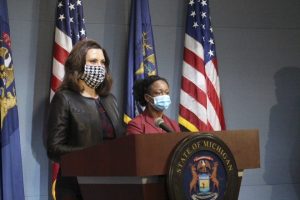 Gov. Gretchen Whitmer’s inclusion of infrastructure investments in her 2021 State of the State address tonight was welcomed by the association representing Michigan’s county governments.

“We appreciate Gov. Whitmer’s call to improve our local roads and infrastructure. While this is not a new topic at the State Capitol, or at the local diner, it is a critical one, and MAC supports making it a priority,” said Stephan Currie, executive director of the Michigan Association of Counties (MAC).

“MAC has been at the table for previous efforts to resolve Michigan’s longstanding infrastructure funding challenges, but we concluded our members cannot support a local gas tax option as a solution, as implementation for it would be nearly impossible,” Currie added. “However, we are open to other suggestions, such as a local option registration fee, and stand ready to partner with the governor and the Legislature to get a deal done.”

“MAC applauds the governor’s efforts to provide additional grant funds to locals to improve our drinking water and ground water across Michigan,” added Deena Bosworth, MAC’s director of governmental affairs. “This plan is essential, utilizes current resources and is the first necessary step in addressing our water infrastructure needs.”

On Tuesday, MAC released its legislative priorities for 2021, which includes the need for local government finance reform; the extension of county commissioner terms to four years to bring Michigan in line with the practice in most of the country; and renewed investment in public infrastructure.

For more information on the Michigan Association of Counties, visit www.micounties.org.