Eight issue areas, led by MAC’s ongoing work to reform local government finance and a push to extend county commissioner terms to four years, have been identified as MAC’s State Priorities for 2020.

MAC issues a priority list each year as part of its educational work with legislative leaders.

“The foundation of our advocacy work, of course, are the policy platforms developed and approved by our members and board each year,” explained Deena Bosworth, director of governmental affairs. “This priority list is built off of those platforms, but taking into account the immediate opportunities and challenges we see in then next 12 months in Lansing.”

The eight objectives for MAC’s Government Affairs Team in 2020 are:

“Some of these will be familiar to members,” Bosworth noted. “But the list is dynamic, in that issues fall off when we are able to record success at the State Capitol, such as last year with a prudent approach to treating 17-year-old offenders as juveniles.” 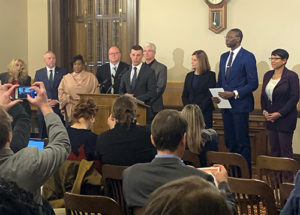 House Speaker Lee Chatfield addresses reporters and others during the presentation of the Jail and Pretrial Incarceration Task Force report to the Legislature Wednesday.

Senate Majority Leader Mike Shirkey (R-Jackson) and House Speaker Lee Chatfield (R-Emmet) received the final Joint Task Force on Jail and Pretrial Incarceration report this week at a State Capitol event. It is now up to the Legislature to review the 18 recommendations and decide where their priorities fall.

Speaker Chatfield commented, “The House will review every one of these recommendations and begin work immediately to help protect the people of our state and give them the local and state government they deserve.”

Highlights of the report include:

MAC encourages members to review the full report and recommendations, as well as discuss with other countywide elected officials and staff. Please feel free to provide input or feedback of support or concern to Meghann Keit at keit@micounties.org. 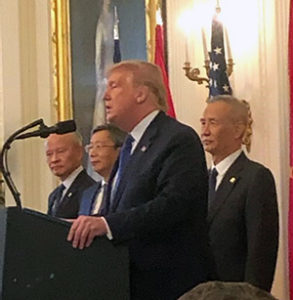 Phil Kuyers snapped this photo of President Trump during the signing ceremony for the U.S.-China trade deal.

Ottawa County Commissioner Phil Kuyers, first vice president of the MAC Board, was among invited guests to the signing ceremony for the new U.S.-China trade agreement.

Kuyers was one of a handful of county leaders who were invited to witness the signing ceremony for the “Phase One Trade Deal” in the East Room of the White House.

In a statement Wednesday, the White House said, “The Agreement requires structural reforms to China’s economic and trade regime in the areas of intellectual property, technology transfer, agriculture, financial services, and currency and foreign exchange. The deal also includes a commitment by China to future purchases of U.S. goods and services, plus a strong dispute resolution system that ensures prompt and effective implementation and enforcement.”

Of the event, Kuyers said, “It was an honor to be invited and attend this historic event, with President Trump and his administration, which will mean $50 billion in agricultural trade and more.”

“Phil is a strong and knowledgeable voice on agricultural policy in every MAC forum, both as a member of our Board of Directors and on our Agriculture Committee,” said Stephan W. Currie, executive director. “His invitation to the signing is more evidence of the administration’s outreach to county leaders in Michigan, which has included special briefings for county leaders from our state in 2017 and 2019.”

The Michigan Public Health Week Partnership, of which MAC is a part, joins the American Public Health Association in celebrating National Public Health Week in April 2020 with the annual presentation of the Hometown Health Hero awards.
The Hometown Health Hero award is presented to individuals and/or organizations that have made significant contributions to preserve and improve their community’s health in the focus areas listed below. Awardees are selected from nominations received by you. The only way for someone to receive this award is to be nominated. What person or organization in your community deserves this statewide recognition?
Nominations are due by Feb. 14. Details can be found in the nomination form.