This refers to Section 30 of the Headlee Amendment adopted by the voters in 1978:

“Section 30 provides that the proportion of state spending devoted to local governments shall not be less than the proportion in effect in FY 1978-79, the year in which the Headlee amendment passed,” explains this 2017 report from Public Sector Consultants. “That year, local aid as a share of state spending was 41.6 percent; some years later, in the aftermath of a suit brought by Oakland County, the local share was recalculated and set at 48.97 percent.”

Plaintiffs in the case had argued the state has miscalculated the payments owed by including the amount it pays school districts, which were primarily locally funded prior to Proposal A. This shift to state payments altered the formula and therefore lessened the required payments to local governments. However, the court rejected that argument.

The decision did leave one small portion of the case still open: the amount of money that is sent to public school academies. This issue has been sent back to the Michigan Court of Appeals for consideration.

A $1 trillion federal infrastructure proposal cleared a key procedural hurdle on Capitol Hill this week when the U.S. Senate voted to begin formal consideration of the issue.

The 67-32 procedural vote, with 17 Republicans joining all 50 Democratic-aligned senators, occurred after a bipartisan work group hammered out the broad elements of the proposal, including:

Much more work is required in Washington, D.C., before these proposals become reality, as the actual text of a bill has yet to be written, much less approved.

Regional Summits finish up with stops in Escanaba, Gaylord 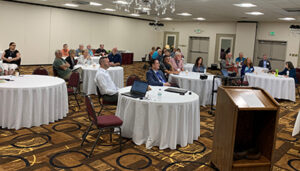 The 2021 MAC Regional Summit series conclude this week with large crowds at stops in Escanaba and Gaylord, with county leaders receiving briefings on ARP funding, risk management and more.

In all, nearly 140 county officials attended one of the four summits, one-day events designed to give commissioners and others a quick look at key public policy topics.

Presentation slides will be posted to MAC’s website and shared with members next week, but for those who were not able to attend, you can view video feeds from two of the presentations at Thursday’s Gaylord site:

“We were pleased with the turnout at all four sites, especially in light of the trends on COVID-19,” said MAC Executive Director Stephan Currie. “That’s proof our members are eager to learn more about addressing the challenges they face in their home counties.”

County leaders are encouraged to provide feedback on court operations during the pandemic via a survey from the State Court Administrative Office (SCAO).

“We have an opportunity now to make decisions that will shape the judiciary for a generation or more,” explained State Court Administrator Thomas P. Boyd, “and these reports are designed to spur the conversation. Your opinion matters and the time to speak up is now!”

The appointment is not subject to the advice and consent of the Senate. Kubitskey’s first MIDC meeting is Aug. 17 at 9 a.m.