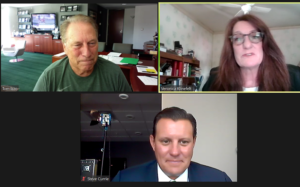 “All of us are role models,” Michigan State University basketball coach Tom Izzo told county leaders gathered for a special session Thursday of MAC’s 2020 Virtual Annual Conference. “You gotta give back some things. I look back and I see I have a responsibility, which is a privilege, not a burden.”

Izzo’s keynote remarks were the highlight of week 1 of the virtual conference, which resumes next Tuesday and concludes next Thursday.

The Hall of Fame coach and national championship winner (2000) expanded on the leadership theme by saying, “Greatest feeling – being a difference-maker in someone’s life.”

During a wide-ranging Q&A after his remarks, led by MAC Executive Director Stephan Currie, Izzo fielded queries on everything from the “side” of Iron Mountain he grew up on to how to bring cohesion to a group of wildly different people to the recent trend in changing team mascots. At one point, the coach seemed to be wistful as he related how, in his young adult days in the Upper Peninsula, his first big investments were trailers, culminating in a “double-wide” unit.

Izzo also engaged in some good-natured ribbing with Currie over the high expectations Spartan fans have for him and his team each year.

“Coach never fails to deliver,” Currie said after the session. “We at MAC are so appreciative of coach Izzo’s time and the kind words he had for the work of county leaders in Michigan.”

The keynote event was the final one of a week that began with a workshop on managing public facilities in a COVID-19 world and the first plenary session, which included the semi-annual “State of MAC” report from Currie and a “Legislative Update” from Governmental Affairs Director Deena Bosworth. 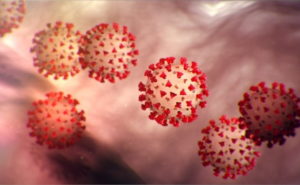 The application deadline for counties to apply for public safety and public health payroll reimbursement for April and May of 2020 has passed. In conversations with the Michigan Treasury, MAC has learned the amount requested for reimbursement will exceed the supplemental budget appropriation of $200 million. This means Treasury will be prorating the reimbursements based on the amount each request bears to the total amount requested. And there will not be another a second round to apply for in August.

On the bright side, the expenses that were not covered in the first round will be eligible for allocation to the CARES Act revenue sharing replacement fund. Again, these are the funds that should total approximately 1.5 times the amount of your August revenue sharing payment amount. Although the replacement is restricted to eligible expenses, public safety and public health payrolls are considered eligible.

As far as the hazard pay program goes, the appropriation of $100 million has not, as of yet, been exhausted. Applications for the program continue to come in, but the threshold is unlikely to be exceeded. 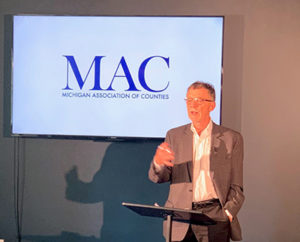 Michigan has devoted increasing sums to its road network in recent years, but road conditions are still projected to worsen, said a transportation funding analyst with the House Fiscal Agency (HFA) during a 2020 Annual Conference workshop on Thursday.

William Hamilton of the HFA led workshop participants through the funding mechanics for roads across the state – and the current and expected results of that work. On one slide, he noted that while about 85 percent of state “trunkline” roads were in good or fair shape five years ago, that share is projected to fall to below 50 percent by 2025.

After Thursday’s session, Hamilton followed up on a couple of questions posed by members during his talk:

“So those two sources add up to $156 million of local funding for county road programs and projects.

“And many townships use township GF as part of a match money program. And there are special assessment districts in many townships to recover the costs of certain road improvements.”

“This document summarizes federal COVID assistance through June 8, 2020; transportation elements are on page 14.

“So far, the only transportation money is for transit and airport projects.  And as we discussed, the COVID money is made available through existing federal aid programs.” 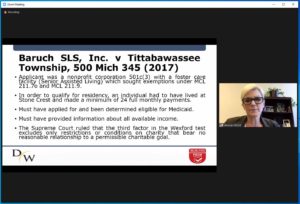 The misapplication of a 2006 court decision has led to a growing number of businesses avoiding local property taxes, putting more stress on already-strained county revenues, a tax law expert told a Wednesday workshop during the 2020 Annual Conference.

Via a virtual session, Jessica Wood of the firm of Dickinson Wright showed county leaders how the 2006 Wexford has led Michigan awry. Pre-Wexford, Wood said, the state had a “common sense, relatively intuitive, straightforward test” for determining whether a business qualified as a charity and therefore received a tax break. But the Wexford decision, she said, “the truck that drove the hole through” state law.

Duo: Invest in tech to deal with COVID in facilities

In the conference’s first workshop on Tuesday, Gary Nauts of the city of Rochester Hills and Terry Van Doren of MMRMA discussed experiences and best practices on handling public facilities in the first few months of the coronavirus pandemic.

Among the points highlighted by the pair:

“We are off to a fast start with the amount of information in our workshops,” said MAC Executive Director Stephan Currie. “While we can’t meet in-person, the digital format still allows us to support continuing education for our members.” 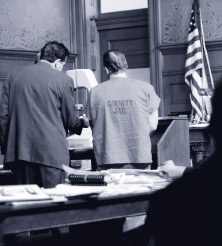 The Michigan Indigent Defense Commission (MIDC) met this week to continue to review and approve county compliance plans and costs analysis, among other items.

The MIDC reviewed 98 staff recommendations for approvals and rejections of county and municipal plans.  The entire list can be found on the agenda here.

Additionally, the commission approved a framework should the FY21 appropriation for compliance grants be less than the total of the approved compliance plans. In February, the governor recommended $117.5 million for plans, but as with all budgetary items, the compliance funding could be in jeopardy due to revenue effects of the COVID-19 pandemic. The latest estimates range from an FY21 shortfall of $1 billion to $1.5 billion in the General Fund. However, the final number will be approved on Aug. 24 at the Consensus Revenue Estimating Conference.

MAC supports full funding of MIDC grants and the $117.5 million proposed by the governor. Anything short of full funding would be a violation of the Headlee Amendment, and per statute, “A system’s duty of compliance with 1 or more standards within the plan under subsection (1) is contingent upon receipt of a grant in the amount sufficient to cover that particular standard or standards contained in the plan and cost analysis approved by the MIDC.”

The commission also received a letter from Orlene Hawks, director of the Department of Licensing and Regulatory Affairs (LARA), indicating Standard 5 (independence of the indigent defense system from the judiciary) is slated to be formally approved by LARA in October. Per statute, “No later than 180 days after a standard is approved by the department, each indigent criminal defense system shall submit a plan to the MIDC for the provision of indigent criminal defense services in a manner as determined by the MIDC and shall submit an annual plan for the following state fiscal year on or before Oct. 1 of each year.”

Lastly, a reminder that standards related to indigency and partial indigency determinations, required by the MIDC Act, are open for public comment until Sept. 14, 2020, and can be submitted to LARA-MIDC-Info@michigan.gov. Alternatively, comments can be sent by that date to the MIDC Office, 200 N. Washington Square, 3rd Floor, Lansing, MI 48913. All comments will be posted and available on the MIDC website. 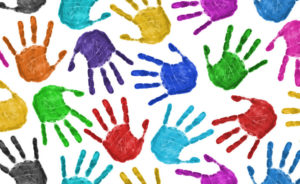 The Michigan Department of Health and Human Services is slated to distribute the $3.5 million appropriated under the FY20 budget to cover Child Care Fund administrative costs relevant to the move of neglect/abuse payments to the “State Pays First” system in the next 30 days. As the state transitioned to the State Pays First model, the statute was not clear whether the 10 percent counties received for indirect costs must be applied to the abuse/neglect population.

The Legislature approved $3.5 million in FY20 to ensure counties did not see a shortfall, but due to so many unknowns during the FY20 budget process under COVID-19, payments were delayed. Since the recent completion of updates to the FY20 budget that included the $3.5 million, the state will be issuing payments as soon as possible. Per correspondence with the department, MAC expects payments within 30 days, and will stay in touch with members if that time frame changes.

A county-by-county breakdown of the $3.5 million can be found here.