Lawmakers and the governor reached a deal on the FY22 budget this week, just days before the Oct. 1 start of the fiscal year. The budget allocates $10.4 billion in General Fund dollars.

The budget includes a 2 percent increase in the base for county revenue sharing, but retained the language requiring the increase in revenue sharing in counties that have been deemed to be in an underfunded status with their pension system to go toward those pension obligations.

Other items of note include:

According to news sources, “Language in the budget that would strip local health departments of their state funding if they have an emergency health order in place to protect against COVID-19 without the assent of their county board of commissioners will likely be deemed unenforceable by Governor Gretchen Whitmer.” MAC expects more legal information to be released soon.

In other county-related details:

Of the $6.5 billion in American Rescue Plan funds allocated to the state of Michigan, the FY22 budget and supplemental for FY21 utilizes just more than $770 million, including $150 million for the Unemployment Trust Fund. The remaining $5.76 billion will be allocated through a series of supplemental budget bills expected to begin negotiations this fall.

For more information about the budget, please contact Deena Bosworth at bosworth@micounties.org or Meghann Keit-Corrion at Keit@micounties.org.

This week, U.S. Treasury released new guidance for the $10 billion Capital Projects Fund that was authorized under the American Rescue Plan (ARP). It is important to note that these are grants for states, which can then be awarded to subrecipients (i.e., counties).

Key points from the guidance include:

MAC has heard from members who are very concerned with the shifting to private interests, whose priorities could be profit-driven and may not have the shared initiatives or partnerships within the county. Additionally, focus should be turned toward expanding on the true integration model at the service level, such as with Certified Community Behavioral Health Clinics and Behavioral Health Homes.

During testimony, Keit-Corrion urged legislators to collaborate with counties to focus on solutions addressing critical staffing shortages and the lack of inpatient care. See Keit-Corrion’s full testimony (beginning at 47:10 mark of video).

Currie participates in Mackinac panel on ARP and equity 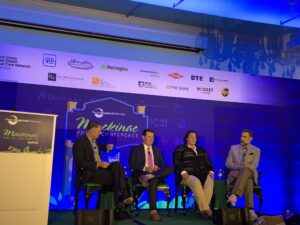 MAC Executive Director Stephan Currie discussed how county governments can work with the nonprofit sector to propel an equitable recovery with of American Rescue Plan funds at the 2021 Detroit Chamber of Commerce’s Mackinac Policy Conference this week.

Currie was invited to the panel addressing for “Opportunities for Transformative Partnerships to Advance Equitable Recovery” on Wednesday. The session explored the challenges and opportunities this influx of federal funding presents and how collaborative partnerships are critical to effectively leveraging federal funding to best serve communities.

During the panel, Currie also discussed MAC’s engagement with the Council of Michigan Foundations and the state’s community foundations for presentations in MAC’s 2021 Regional Summit series over the summer.

MAC also hosted CMF’s Kyle Caldwell on Podcast 83 to discuss how counties and community foundations can work in tandem to boost public amenities and quality of life.

In addition to Caldwell, Currie was joined on the panel by Alize Asberry Payne, racial equity officer for Washtenaw County.

What is the ‘deadline’ for county apportionment work?

MAC has received questions from members on deadlines involving county apportionment as they relate to the U.S. Census Bureau’s release of data from Census 2020. Justin Roebuck, clerk of Ottawa County, provided some background from his research:

“Apparently, there are two different definitions of the date when the Census Bureau (CB) will release (or has released) ‘official data.’

“On Aug. 12, the CB released the bulk of the data, which included block data on population, and which they called “official.”  However, they had scheduled for Sept. 30 a final release of all data, which would include some of the demographic data not yet available. (The Sept. 30 date has subsequently been moved up to Sept. 16.)

“Guidance for map submittal from the Secretary of State and Bureau of Elections from the beginning has been based on the September release of all data, but a number of county clerks, as well as other County Apportionment Commission members, have raised concerns citing MCL 46.401, which indicates we must submit our final county maps no later than 60 days after the release of ‘official’ data from the CB. The Michigan Association of County Clerks obtained a legal opinion stating that the 60-day clock began on Aug. 12, and that Oct. 11 was actually the date that final maps should be submitted. Subsequently, the Bureau of Elections asked for an Attorney General’s Office opinion on the matter, and they received a memo from the AG’s Office indicating that the clock should start on the September 16 release date, meaning Nov. 15 would be the final date for map submittal.”

“In addition to that, a few counties have now asked the Court of Appeals for an extension of the October date, just to be sure and give themselves enough time. Branch County received an extension from the court.”

MAC will continue to collect and share information on this issue as it becomes available.

The Michigan Department of Treasury will host its next “Chart Chat” webinar on Sept. 30 at 2 p.m.

The Chart Chat series provides updates to local government officials on accounting-related topics, updates from the Michigan Department of Treasury and information on sound fiscal management.

This session will cover:

The department also maintains a webpage with numbered letters, memorandums, webinars, and resources regarding COVID-19 updates for local governments and school districts. This webpage was created to ensure Michigan communities have access to the most up-to-date guidance.