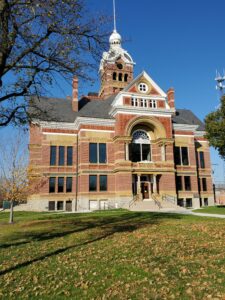 Updates and restorations projects to prepare Lenawee County’s “Old Courthouse” for the next 100 years came together in early 2020. Careful considerations to both the interior and exterior were given to energy efficiency, mechanical updates and floorplans designed to bring accessible technology and a comfortable environment to this 135-year-old courthouse, while preserving the history and period look of a local landmark.

As with any renovation project there were many challenges and surprises. We are pleased with the finished project; it is energy-efficient, sound and mechanically prepared to grow with the county for years to come. The project manager, architects, carpenters, masons, artists, and crewman put their hearts and talents into restoring a piece of history.

There were areas in the sandstone that had to be repaired by chiseling back to solid sandstone and then re-created with a sandstone compound. The lead coated dome and the painted areas of trim work were given a fresh coat of white paint. Automatic door assistance mechanics were added to exterior doors to assist with opening the heavy doors.

Throughout the history of this building, the basement has been used in many ways. There are currently three conference rooms, a kitchen, ample storage rooms, and a fire suppression system room.  The basement vaults have been converted into storage rooms. 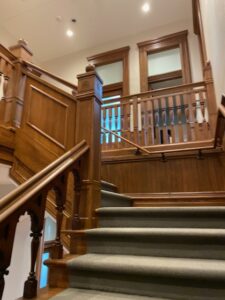 Fire doors that once separated the wings of the first-floor hall were removed and special attention was required to re-create several plaster flowers that adorn columns throughout the building.

A wheat mosaic lays in the center of the building, for which only minor repairs were necessary. The floors were polished and buffed.

Entry doors to each suite have all been modified with an auto door opener. Each suite offers a private restroom, while a handicap-accessible restroom is now available to the public in the corridor.

The two grand staircases leading up to the second floor that were once enclosed have been opened and splendidly restored. The banisters are of cherry and the rise and tread of Georgia yellow pine.

The floors on the top floor were leveled and covered with ¾” redwood. Four bronze, beautifully ornate, push plates were replicated through a mold and pour method to match the originals. 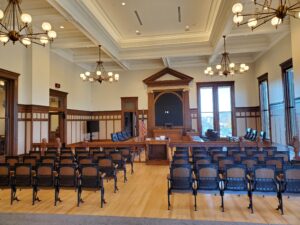 The coffers were restored, while canned lighting, speakers, security and four grand bronze chandeliers were added. The workmanship is beautiful, and the finished ceiling is stunning.

Four windows that had been bricked up long ago have been restored to their full height. And the chamber room is back to its original size of roughly 40 feet by 60 feet, with an impressive 23 feet of height.

The judges’ office located behind the bench has been revamped into a kitchenette and a cozy office. 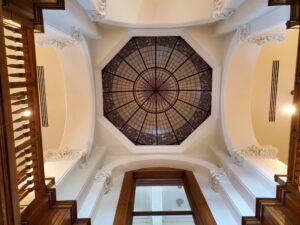 Four columns built of hard-burned brick, laid in cement mortar and flushed with cement are set in the center of the building and extend from the foundation to the cupola on top; this is referred to as “the tower.” The tower is filled with stone arches and columns, with impressive carvings.

The area between the first and second floor is once again open, restoring the rotunda to its original size.  From the balcony of the rotunda, you can look down upon the wheat mosaic tiles of the first floor or look up to a fantastic stained-glass dome created specifically for this building. The artist, Victoria Balva, incorporated architectural designs from the exterior of the building and captured the spirit of the building while adding hints of lavenders, peaches and pinks. A light box was built to provide back lighting and bring the artwork to life.

Right before Christmas, staff for the register of deeds, treasurer, equalization, administrator and board of commissioners were able to move into their “new’ offices in the “Old” Courthouse.

The final cost for the renovation was $8,825,000, bringing the project in under budget – and in less than two years.