Written by Derek Melot on May 4, 2021. Posted in MAC news, Legislative

For the first time, the Michigan Association of Counties government affairs team consists of only women who are no strangers to the Capitol community but have still faced challenges when advocating for their agenda in a field that has historically been dominated by men. 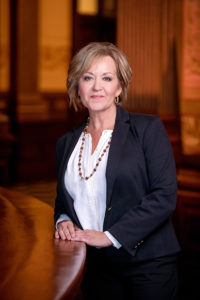 While the current team at MAC marks the first time that advocacy group has had an all-women team heading its government affairs, there’s also a multiclient firm with an all-women staff, RWC Advocacy.

Those at the organizations spoke about the challenges they face in the lobbying world and what priorities they hold this year as the Capitol community begins moving toward normal operations following the coronavirus pandemic.

Deena Bosworth is at the helm of the three-person governmental affairs team, leading it as director. Ms. Bosworth is well known around Lansing and has worked as communications and legislative director for the House of Representatives and director of legislative affairs for former Attorney General Mike Cox.

Ms. Bosworth said there’s always been some difficulty breaking into “the boy’s club,” but women lobbyists have gained more respect from their male peers.

“We are starting to get more respect,” Ms. Bosworth said. “But I’ve had situations where legislators wouldn’t meet with me alone because I’m a woman. There’s always been a boys club, which I’m not a part of.”

Ms. Bosworth and her team, including Meghann Keit-Corrion and Hannah Sweeney, work to stay focused on policy and know the issues to help make up for challenges they face in Capitol community that can be seen as a boy’s club.

Ms. Keit-Corrion has worked with Sen. Jim Stamas and as a legislative analyst for Midwest Strategy Group, a multiclient firm. Ms. Sweeney recently received her master’s in public policy from Michigan State University and works as the team’s governmental affairs assistant. 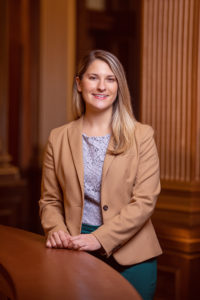 “I think for me, I’m starting MAC at the start of my career, it’s important that I work with two other women who are able to bring me in and teach me the ropes, especially now that we see women become more politically active,” Ms. Sweeney said.

Before starting with MAC in 2017, Ms. Keit-Corrion was working with the Legislature with different groups and organizations. Over the past 10 years, she says she has been welcomed into a variety of groups because of more women “having a seat at the table.” Ms. Keit-Corrion said MAC offers internships and teaches young women and men how lobbying for governmental affairs works.

“It’s not about searching for women to join the governmental affairs team, it’s about noticing women who have those qualities to be successful and showing them the ropes so that there’s more women in 10 years in lobbying and other aspects of politics,” Ms. Sweeney said.

As a lobbyist, forming good connections is an integral aspect of the job. Without them, Ms. Bosworth said it is much harder to advocate for your policies.

“If you don’t have those relationships and you’re not a part of that boy’s club, it presents greater challenges. It makes relationship building a little harder,” Ms. Bosworth said. “Especially when you have some legislators who have concerns about building a relationship with female lobbyists.”

To combat this, Ms. Bosworth said she and other female lobbyists double down on their knowledge of policies to compensate. MAC’s executive director is Stephan Currie and at times, the government affairs team needs to call him in because legislators do not give the team the same respect as Mr. Currie.

“Having an all-female government affairs team means we must that we have to be much more policy-focused and work harder on building those relationships,” Ms. Bosworth. 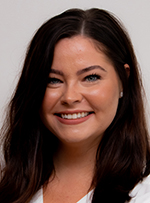 In certain dynamics, Ms. Bosworth says the team has found a balance between being assertive without coming across as “bossy.” Her team was picked because of their work ethic and willingness to dig into the work.

“It really takes a huge level of dedication to lobby on behalf of county government because we have so many issues and the inherent challenges we have (as lobbyists),” Ms. Bosworth said.

MAC’s government affairs team is not the only all-women lobbying group in Lansing. RWC Advocacy is a multiclient firm that has been on the Lansing scene for the last 30 years. Melissa Reitz, RWC Advocacy director, bought the governmental affairs law firm with then-partners Elizabeth Weihl (now of counsel) and Peter Ruddell (who has since moved to the Honigman firm).

The firm was originally owned by Rick Wiener, former chair of the Michigan Democratic Party, and his wife, Raj Wiener, former director of the then-Michigan Department of Public Health. After ending their time in the public sector, they co-founded Wiener Associates.

“I think Raj really brought a tremendous amount of strong female leadership from the beginning and Betsy and I were honored to carry that on into 2020 and now,” Ms. Reitz, now the sole principal in the firm, said. “We’re really proud to have that identity, especially in the current time that we are living in.”

This legislative term, RWC is working with the Epilepsy Foundation of Michigan to ensure schools would be “seizure safe.”

Though they have not faced direct discrimination, the women at RWC said they find the environment very supportive of their work.

“Our employees and our teams generally express how supported and empowered they feel at our firm,” Ms. Reitz said. “Not to say they didn’t feel supported at previous jobs, but I think they definitely have very explicitly expressed how much they love working as a team together and just feeling empowered.”

This legislative term, MAC has a large list of policies it seeks to tackle. With six internal committees, the three members of the team cover the breadth and depth of county government such as transportation and finance.

This story originally appeared in the May 3 report of Gongwer News Service. For more than 110 years, Gongwer News Service has set the standard by providing its subscribers the most independent, comprehensive, accurate and timely coverage of issues in and around state government and politics.