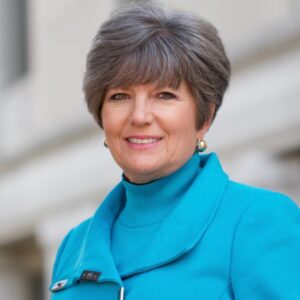 The Michigan Association of Counties (MAC) joins with the rest of the Lansing community in mourning the loss of our friend Kelly Rossman-McKinney.

Rossman-McKinney, who joined the Board of Directors for MAC’s Service Corp. in 2013 and helped spur a transformation in the organization’s promotion of services to county governments, passed away Nov. 9, 2021, after a long battle with cancer.

“Like so many in Lansing, I had the honor of calling Kelly my friend and enjoyed the gift of being able to call on her experience and her wisdom whenever I confronted any challenge with MAC,” said Stephan Currie, MAC’s executive director. “Kelly’s tenure on our Service Corp. Board of Directors was marked by success and growth – no surprise, since Kelly excelled in whatever she put her mind to.”

Sam Hopkins, president of the MAC Service Corp. Board of Directors, said:

“I knew Kelly for many years in many roles as fire chief in Lansing and East Lansing, but it was not until I began to serve with her on the Service Corp. Board that I learned the full measure of her gifts and her passion for Lansing and Michigan. You knew where you stood with her, but she always treated everyone with respect in debates, whether you had the ‘right’ answer or not. Our community has lost a true champion.”

Rossman-McKinney started her career in Lansing as a legislative secretary in 1979, reported the MIRS News Service. She steadily advanced in public service before blazing a new trail in the world of public relations in Lansing, becoming one of the most knowledgeable and respected people in public life in Lansing and state government. She tried her hand at electoral politics in 2018, running for a Michigan Senate seat. Most recently, she served as communications director for Attorney General Dana Nessel.

The leadership and staff at MAC extend our condolences to her husband, “Officer Dave,” her family and the countless friends and colleagues made over a life so well lived.