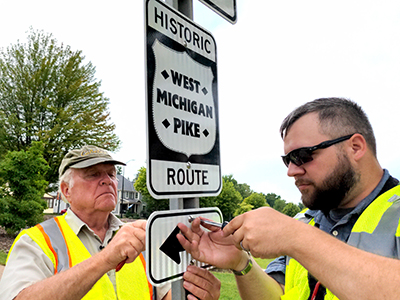 The West Michigan Pike was once the premier way to travel along Michigan’s western shores. This highway running along Lake Michigan was conceived of and built during the second decade of the 20th century to accommodate the “horseless carriage,” opening up the region to tourism and the development it would bring.

Eventually, the Pike was replaced by state and U.S. highway systems and was mostly forgotten. But now, thanks to local historian Blaine Knoll, the Ottawa County Department of Strategic Impact, and Grand Haven Area Community Foundation funds, the West Michigan Pike lives again. New signs commemorating this key piece of West Michigan tourism and automotive history are being installed along the original route.
“Beginning at the Ottawa-Allegan County line, the newly marked route stays as true to the original route as possible,” said Knoll. “It winds through the southwest side of Holland, follows a series of secondary roads, part of U.S.-31, then heads through Grand Haven and into Ferrysburg.”

The effort to recognize the original historic route doesn’t end with signs. Knoll and County staff are also developing a commemorative plaque to be placed where an original Pike marker from 1916 still stands along 152nd Avenue in Olive Township.

“The plaque recognizes the last known standing marker of the West Michigan Pike Historical Route. The installation of all the concrete pikes along the route was never completed due to the everchanging roadways. Witnessing this pike’s original location is significant to the route, and we are proud to highlight it,” said Ottawa County Land Use Specialist Andrew Roszkowski.

The project has been years in the making. “It all started when I was young,” said Knoll of his interest in the Pike. “My dad told me about seeing the 64th Street portion in Allegan County being paved right after World War I. 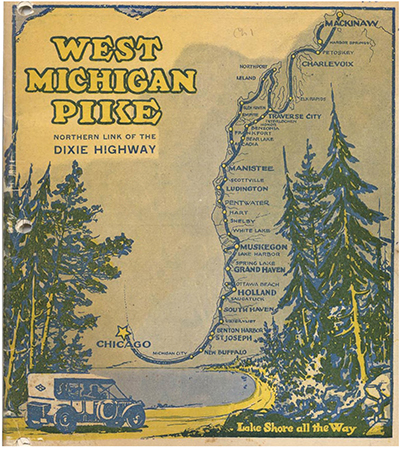 Around 2011 I started mapping the whole route from Michigan City (Indiana) to the Straits of Mackinac.”

A few years later, Knoll approached Ottawa County with an idea to retrace the original Pike route. Working closely with Knoll, the Tri-Cities Museum in Grand Haven, Michigan Beachtowns and other stakeholders, staff created mockups of signage, and had the signs made. Funding for the signs was generously provided by the Elizabeth Davidson Kammeraad Dobbie Fund for History and the Greatest Needs Fund of the Grand Haven Area Community Foundation.

In 2018, two original concrete West Michigan Pike road markers were discovered near Spring Lake. “They were being used as clothesline posts,” mused Knoll. Both have been loaned to the Tri-Cities Museum in Grand Haven for a time to display as part of a West Michigan Pike Exhibit. This interactive exhibit with numerous artifacts told the life story of the Pike.

In 2016, the state recognized a small section of the Pike as a “Pure Michigan Byway”, joining 22 other historic, scenic, and recreational Michigan byways that include M-22 byway, Tahquamenon, and the U.S.-12 Heritage Trail.

“It’s important that local history like this stays alive,” said Knoll. “I’m thankful to Ottawa County for allowing this project to go forward.”

For more information on the West Michigan Pike, visit www.michiganbeachtowns.com.

Have an interesting project under way in your county? MAC can help share the news. Send your details to Derek Melot at melot@micounties.org.