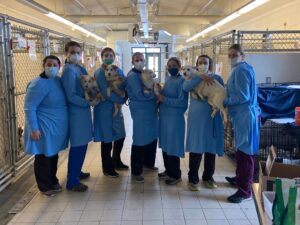 A few of the countless volunteers who assembled in support of the “Disney dogs” pose with a few of their charges in Grand Traverse County. (courtesy photo)

From “101 Dalmatians” to “Lady and Tramp” and “Bolt,” the dogs in Disney films have dodged danger, risen above indifference and cruelty and started new, brighter lives for themselves.

So, when Grand Traverse County Animal Control was confronted with an unprecedented canine crisis, a very Disney-like tale with the usual large cast of interesting characters began to unfold.

The story begins when more than 160 dogs were seized from an East Bay Township home in late January by Grand Traverse staffers and eventually encompasses animal control and adoption agencies from across Michigan, all trying to bring the animals a happy ending.

It was Cherryland Humane Society in Traverse City, which provides sheltering services for dogs rescued by the county, that first applied the “Disney Dogs” label because, “They deserve a happy ending,” said Naomi Washburn, Cherryland communications and marketing manager.

The county and Cherryland spearheaded the early rescue operation, one that quickly had its share of sadness, as 32 of the animals were found dead upon arrival at what has been described as a “large-scale” breeding operation.

This news only spurred on the rescue teams, though.

“This extremely negative situation was quickly turned into a positive one by the outpouring of help and donations from our community and other surrounding communities,” said Jaime Bemiss, Grand Traverse County animal control supervisor. “This positive response really shows how much our community cares about animals and the needs for agencies like Animal Control.”

“It’s almost indescribable the feeling of everybody coming together to care for these animals and just the sheer number of them was overwhelming in itself, and emotional and heartbreaking,” added Washburn, “It was really incredible working with a large number of animal control and adoption agencies to give these dogs the best care.” 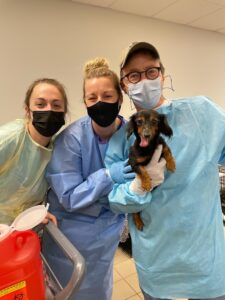 Mabel suffered horrible abuse and was discovered without her lower jaw at the time of rescue. That didn’t stop her from sharing a smile as she poses with her helpers (right to left), Dr. Dave Durham Ryann Vanderheide, licensed Vet Tech), and Christa Trudo, medical coordinator for Cherryland Humane Society. Mabel was adopted and now “is living a happy life being spoiled rotten,” said Naomi Washburn of Cherryland. (courtesy photo)

The county was investigating the property because the owner had failed to comply with a junk ordinance. But then the dogs were found. Many of them were malnourished and had frozen paws, suffering in deplorable conditions, with little access to food, clean water and medical attention. Due to huge number of dogs, Grand Traverse County and Cherryland Humane Society knew this was something they could not handle alone.

At the time of the seizure, for example, Cherryland was housing fewer than six dogs. “We’re very lucky to have that extra space in our shelter,” said Washburn. “We have had a broad spectrum of assistance and help. There are many different veterinarians that have reached out. The Bissell Foundation paid for all the vaccinations. Several different groomers came in because some of these dogs were in boxes and crates hidden in a truck. You can only imagine that kind of abuse. Their fur was very bad, so we had to have all the different realms of our community come together to take care of them,” she added.

The owner of the residence recently was sentenced to six months in jail for failing to provide adequate care to animals, an all-too-common story in our country. As many as 5,000 new cases of animal hoardings are reported each year in the U.S, involving 250,000 animals. Most such cases involve fewer than 50 animals, however, so the Grand Traverse situation was an extreme one – requiring a unique response.

The agencies have been in the process of adopting the dogs out, “we have received over 100 applications for these dogs before we even were able to put them on our website,” said Washburn in May. “We have to process applications for these dogs very carefully because they have been through a lot of distress and need a lot of love and work, but the adoptions are going really well across the board as long as I’ve heard from the other shelters that we transported to.”

Dogs were rehomed as far away as the Upper Peninsula and Lansing. Only one dog with some challenging needs is still at Cherryland to be adopted.

“We learned quite a few lessons throughout this situation,” said Grand Traverse’s Bemiss. “One of the most important being that if we band together as one, we can accomplish most anything.

“We need to take a closer look at our county ordinances and state laws surrounding animals so these situations can be dealt with prior to becoming this dire,” she added. “Most Animal Control agencies are small programs that aren’t always funded as they should be. Communities can make a huge difference by supporting their local agencies through helping spread awareness messages, volunteering and donating.”

“From this operation, we have learned that our community is incredible,” added Washburn. “These dogs now have a second chance at a better life, and it took a village to make it happen.”