Eliminating the sunset on a county’s ability to absorb a road commission is getting closer to being finalized under Senate Bills 322-23, which passed the House and Senate in 2019 and were sent to the governor this week.

Since 2012, counties have had the option of absorbing their appointed road commissions. In cases of an elected road commission, a county could put the question up to the voters. The deadline for a county to do so was Jan. 1, 2020. The bills, if signed by the governor, will eliminate the sunset/deadline and make this a permanent option for counties, a change MAC has strongly supported.

In addition to the elimination of the sunset, the bills would require a vote of the people to change an elected road commission to an appointed one. MAC will provide an update on bills as events warrant. 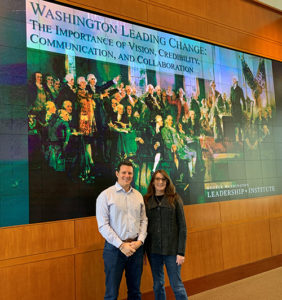 Stephan Currie and Veronica Klinefelt were at NACo headquarters in Washington this week for policy briefings.

MAC Board President Veronica Klinefelt and Executive Director Stephan Currie joined their counterparts from around the U.S. this week in Washington, D.C., for three days of issue briefings, policy discussions and meetings with federal officials.

On Wednesday, the group received a presentation on George Washington’s “enduring relevance” and leadership. The next day, the group went to the White House complex to meet with Trump administration officials, including from Interior officials on the National Environmental Protection Act.

“This week was another example of the strong and continuing outreach from the administration to county leaders,” Currie said.

County leaders interested in learning more about federal policy still have time to register for the 2020 National Association of Counties Legislative Conference, Feb. 29-March 4 in Washington. Early-bird pricing remains in effect until Feb. 14. In conjunction with the conference, MAC will hold special events on Capitol Hill to engage Michigan commissioners with their members of Congress. 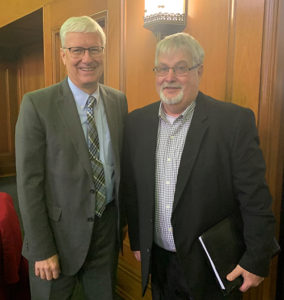 Jim Talen of Kent County (left) and Bill Peterson of Alpena County after the Jan. 9 meeting of the Jail and Pretrial Incarceration Task Force.

“The work of the Joint Task Force on Jail and Pretrial Incarceration (#MICJReform) is notable for both its outreach to county leaders directly involved in jail operations and for the data it has brought to public attention,” said SCurrie, executive director. “Crime rates are dropping, yet jail populations remain high, which puts severe stress on limited county budgets. I know our members are eager to study the Task Force’s ideas for prudent measures to reduce jail stress while also ensuring public safety isn’t compromised.”

The panel was launched last spring via an executive order by Gov. Gretchen Whitmer. It has been reviewing data in order to study alternatives to jail, safely reduce jail admissions and length of stay, support crime victims and better align practices with research and constitutional principles.

A press conference will be held Jan. 14 at the State Capitol to outline specific recommendations and initial steps by legislative leaders in response to them.

Act by Jan. 17 on intention to pursue veteran funds 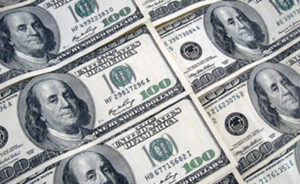 Letters of Intent to apply for the FY20 County Veteran Services Fund grant monies are due Jan. 17.

Information released this week by the state Veteran Affairs Agency outlined the process and timeline for counties to receive grants. Per law, each grant award will consist of a $50,000 base payment. Per capita payments also will be processed based on the county’s veteran population.

An FY20 supplemental appropriation included $4 million for the fund after months of negotiations between the Legislature and the Governor’s Office. The letter from the agency states, “(T)he goal and intent of these grant dollars are to enhance and improve county veteran service operations in an effort to connect more veterans to their benefits and provide consistent access to services throughout the state.”

Grant guidance will be distributed by the agency. If counties have any questions about uses of the funds, please consider connecting with surrounding counties or MAC.

For other questions or information, contact Meghann Keit at keit@micounties.org.

Do you have PPT errors to correct? 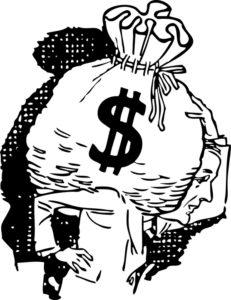 Local governments were reminded of the opportunity to correct errors associated with incorrect personal property tax (PPT) reimbursement calculations in a memo this week from the Michigan Department of Treasury. For a municipality to determine if there was a reporting error or a calculation error, it will need to review the 2019 PPT reimbursement calculations, millage rates and taxable values posted to Treasury’s PPT Reimbursement website.

If a local unit or county identifies an error, then forms found on the department’s website must be filled out and submitted by the deadlines below. The PPT reimbursement correction forms are intended to be utilized by a local unit that has identified an error in its 2019 PPT reimbursement. In addition to the form(s), local units must provide substantiating documentation to support an adjustment to the reported value or the calculated reimbursement amount.

Forms to correct reimbursement calculations must be submitted by the local municipality to the County Equalization Director by Feb. 28, 2020, and subsequently by the County Equalization Director to Treasury by March 31, 2020. Correction of all other errors, including millage rates, must be submitted by all local units directly to Treasury by March 31, 2020. 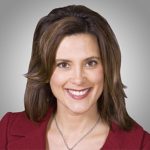 Governor’s State of the State address will be Jan. 29

Gov. Gretchen Whitmer has set Jan. 29 for her 2020 State of the State address to the Legislature. The speech will start at 7 p.m.

The yearly address is an opportunity for Michigan’s governor to highlight accomplishments from the past year and chart priorities for the new year. 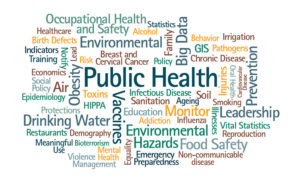 The Hometown Health Hero award is presented to individuals and/or organizations that have made significant contributions to preserve and improve their community’s health in the focus areas listed below. Awardees are selected from nominations received by you. The only way for someone to receive this award is to be nominated. What person or organization in your community deserves this statewide recognition?

Nominations are due by Feb. 14. Details can be found in the nomination form.

Members of the Michigan Counties Workers’ Compensation Fund (MCWCF) will receive nearly $3.2 million in premium dividends for the 2018 plan year, adding to a dividend total of more than $28 million in the last 10 years alone.

These dividends result from “surplus” funds from policy premiums paid by members but not utilized due to the fund’s excellent claims management and innovative loss prevention strategies, explained Timothy K. McGuire, the fund’s administrator.

“Our consistent focus on employee safety is the story here,” McGuire said. “If employees avoid injuries, our members avoid health costs, thereby keeping costs down for the fund and allowing the fund to release more dollars back to the members.”

“Another year and another excellent result for our members” said Doug Johnson, president of the fund’s board and a commissioner for Otsego County. “The partnerships we have with CompOne and Midwest Employers Casualty allow the fund to provide top-notch customer service and safety guidance.”